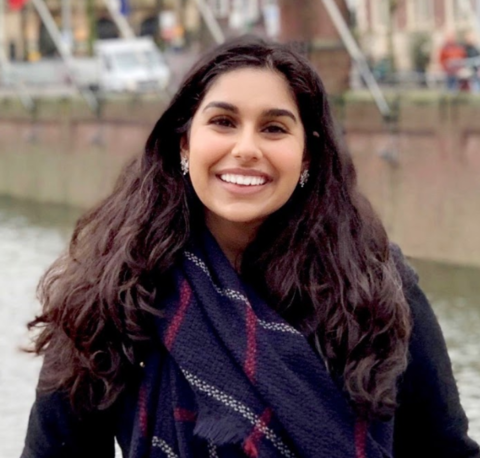 On September 6th, 2017 I watched Hurricane Irma destroy my home, the Caribbean island of Saint. Maarten/Saint. Martin. After the hurricane passed, I was unable to contact my parents for over 24 hours. All I had to tide me over were news broadcasts showing half of my island underwater, flattened concrete buildings, and pieces of cars, boats, and roofs littering the streets.

On Saint. Maarten, I grew up experiencing hurricanes and tropical storms. However, the apocalyptic destruction caused by Hurricane Irma was unlike anything I could have imagined. It broke records in 2017 when it maintained an intensity of 185 mph winds for 37 hours. More importantly, it showed me that un-contained climate change would eventually destroy the place I call home.

While hurricanes occur naturally, there is growing evidence that they are being supercharged by climate change. Hurricanes begin with atmospheric heat and are fueled by warm ocean water. The rise in greenhouse gasses can be linked to the rising temperatures of ocean water. In fact, since 1901, ocean surface temperatures have increased by .072° C per decade. The hotter the air is, the more water the atmosphere can hold, creating prime hurricane conditions.

The United Nations recognizes 29 Small Island Developing States (SIDS) in the Caribbean region. Most of these SIDs are located in prime hurricane real estate and are extremely vulnerable to the damage caused by major storms due to their topography, low sea levels, and limited funds for disaster preparedness. In fact, despite the differences among Caribbean island nations, one commonality is that they are extremely susceptible to the impacts of climate change despite barely contributing to it.

In 2017, survivors on my island and other Caribbean nations had to contend with a loss of proper habitat, prolonged power outages, a shortage of necessities such as water and food, strained mental health, increased chronic/vector/water-borne diseases, and debilitated or non- existent health care facilities.

Not only is climate change creating inhabitable and dangerous environments, but it is also leading to exacerbating levels of migration. Going beyond the Caribbean, climate inaction is expected to lead to the migration of over 143 million people in just Latin America, South, Asia, and Sub Saharan Africa by 2050. Increased migration is projected to lead to conflicts over natural resources, competition over water and food, security concerns, disease, and rising hostile nationalism.

While worsening hurricanes are the primary battle that many Caribbean SIDS will face, all countries will have their own climate change battles. Therefore, we must band together regardless of nationality to combat climate change through SDG 13.

According to UNEP, we are on the brink of impactful action. Any temperature increase past 1.5 °C will result in progressively severe and widespread consequences. Currently, temperatures have already increased by 1.1°C. To limit the rise of temperatures, emissions worldwide must be reduced by a collective 7.6% every year between 2020 and 2030. The risk of climate change inaction also has dire economic consequences. For every additional ton of CO2, the global social cost exceeds $400. Based on 2017 CO2 emissions, the global impact exceeds $16 trillion.

Youth must be at the forefront of the climate battle. Current climate plans are not stringent enough to tackle present emission levels or create lasting impact before 2030. In many cases, party politics cloud scientific facts, and some countries continue to pretend that we need to choose between economic prosperity and the health of citizens. Future and current generations must have a say in climate action as we are the ones who will be the most impacted by it.

These are several actionable items that we as youth can engage in to further SDG 13:

We are the last generation that can combat climate change. If we do not take action by implementing the necessary preventative measures in the next decade, it will be especially damaging to SIDS such as my island, Saint. Maarten. Some may even be destroyed beyond repair. But most importantly, it will lead to the creation of a potentially uninhabitable world and economy for all generations to come, regardless of nationality, monetary status, or physical location.

Mainstreaming of Ecosystem Services into Recovery and Resilience Pathways, and Development Policy and Planning in Samoa

Joint SDG Fund: For a digitized, innovative and accessible statistical system in the Comoros