HANOI (ILO News) – On an abnormally hot day in late summer, a sudden blackout made the atmosphere in a small alley in Binh Xa Village, Binh Phu Commune, Thach That District in the outskirt of Hanoi almost unbreathable. Two young women were busy nursing their newborns who both did not seem comfortable with the heat.

Living at two premises so close to each other that they could hear the other baby’s crying, Nguyen Thi Lan and Nguyen Thi Ngoc were both 22 years old and could be seen in their pajamas almost day long like many other stay-at-home mums.

Despite many similarities, Lan and Ngoc lived completely opposite lives as the way their homes faced each other. Lan – a single mum with neither income nor insurance – was struggling to feed her two children and paying the rent for an 8sq.m apartment on her own. Meanwhile, Ngoc happily lived with her husband in a new 3-storey house – a wedding present from her parents-in-law – and would soon return to her full time accounting job after the 6-month maternity leave.

However, they met again as both new mothers were still in a shock of how having children can be that financially challenging.

“Our just-married life was so comfortable with our income as we already had a house thanks to our parents’ support. But with a little girl now, it is not that easy anymore,” said Ngoc who holds a university degree and an insured job with potential benefits for her small family as her husband, a carpenter, does not have a formal employment. “I have to think twice now before buying anything.”

Both women wished if only they had a regular financial support to cover the costs of feeding and bringing up their tiny angels.

Lan and Ngoc are among 44 per cent of all workers in Viet Nam who are currently experiencing the challenge – the extra cost of bringing up children, according to a new study by the International Labour Organization (ILO).

Among them, Lan’s case could be towards the darker end of the spectrum.

Moving in with her wealthy boyfriend two years ago when she worked as a garment worker without a formal contract, they soon welcomed their first baby boy with tremendous happiness. But when finding out that she was pregnant with their second child, she also discovered that he was cheating on her.

Completely shattered, Lan moved out, rented the slum-like apartment in this village to live with her first son waiting for her due date although she no longer worked at the factory and received no financial support from the wealthy boyfriend.

“I have been using all my savings to pay the rent and childcare fee for my son – both about VND2 million per month. My aunt brings us some food every day. But since this little girl was born, I have had to also buy formula which is costly as I don’t have any breast milk … possibly because I have been under-nourished,” she said throwing a sorrowful gaze at her 20-day-old infant whom she intended to leave with her aunt in two months’ time to go back to work.

People can never anticipate their lives can change like that so fast. That’s why the ILO insists on the importance of the social security system to make sure that life challenges don’t push people into poverty.

If Lan had ever known she would go on that downward spiral, she would not have left her factory job. She even wished the factory had paid social insurance for her, so she could have had at least maternity benefits and health insurance for herself and the baby. 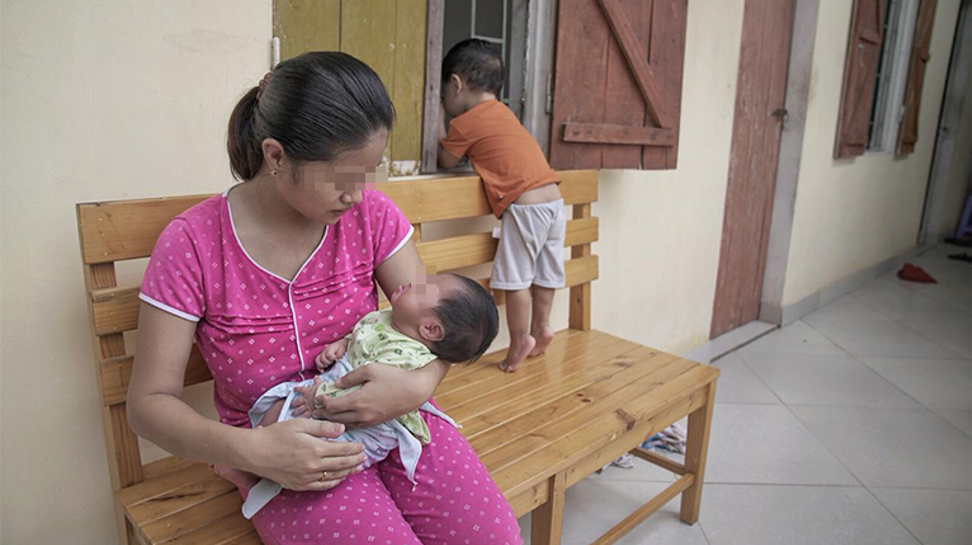 Nguyen Thi Lan (not her real name) with her two children outside her rented apartment. Photo ©ILO/Nicolas Axelrod

In Viet Nam, around 44 per cent of uninsured workers have children.

“Of these working parents, more than half – or 56 per cent – would be considered insurable under existing regulations of Viet Nam Social Security, so it makes sense for the social insurance system to develop tools to appeal to the particular needs and challenges of this group,” said Betina Ramirez Lopez, social protection officer of the ILO in Viet Nam.

The ILO in Viet Nam through IrishAid-funded project on Social Protection and Inclusive Growth has been helping the country develop and implement a comprehensive social insurance reform, which is now also considering family benefits – or monthly cash allowance for working mothers with children.

“There is ample evidence from around the world that social protection for families and children not only reduces poverty, but supports better nutritional and health, improves school attendance and performance, reduces the risk of abuse, maltreatment and child labour, and setting the children up to be happier and more productive workers and citizens in the future,” said Ramirez Lopez.

Inspired by the Viet Nam Social Security agency, the reform looks into various options to develop a multi-tiered system which offers support to working mothers of newborns in compulsory and voluntary system.

“Bringing in all of the workers that are currently experiencing the challenge of bringing up children could increase social insurance coverage to half of the working age population, while also securing adequate protection for all families,” said the ILO specialist.

If rolled out nationally, the Vietnamese Family Benefit would complement additional provisions such as the maternity leave and health insurance already available to workers. Taking advantage of this opportunity can set Viet Nam on a path to developing a coherent and well-designed family support mechanism within the emerging social security system – one that fits for a rapidly growing middle-income country, creates happiness to all workers, and brings the smile back to the new mums Lan and Ngoc.